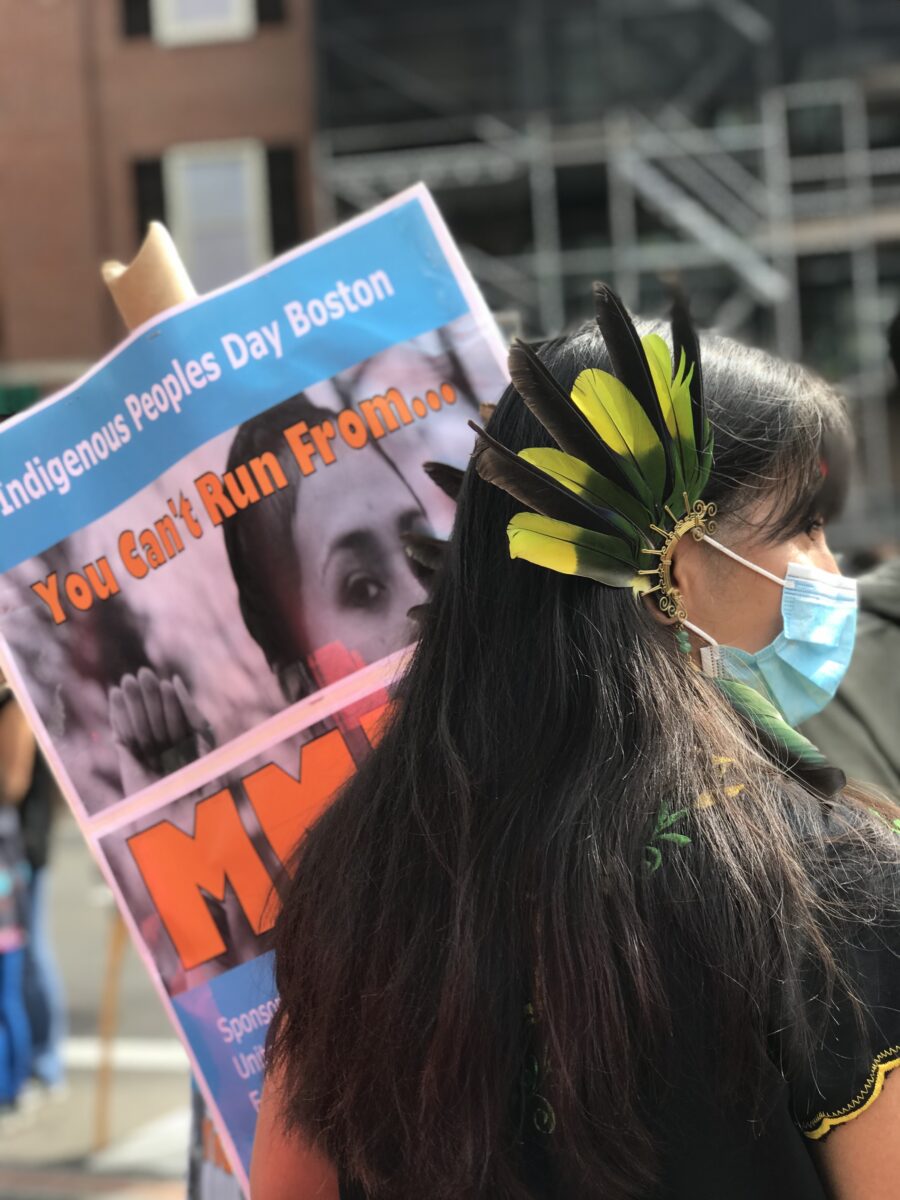 An executive order was signed by Mayor Kim Janey last week to officially change the second Monday in October to Indigenous People’s Day after decades of effort by Indigenous groups, leaders, and supporters and pushback from Italian-Americans.

There has been a varied response from the community in favor and opposed to this change. One particularly divisive post came from City Councillor Lydia Edwards on Facebook on October 6.

“I was elected to represent the largest Italian American community in the city. Today’s unilateral action by the acting mayor was a surprise to me and I don’t believe it encourages the honest, transparent, healing conversation we need,” said Edwards.

Edwards’ post went on to say, “We should absolutely honor and celebrate Indigenous people as a city. Boston will forever celebrate, honor, and acknowledge Italian Americans. With the right conversation, led by our new elected mayor, that recognizes the urgency of the moment we as a community will do both.”

Edwards is the City Councilor for district one which encompasses East Boston, Charlestown, and the North End/ Waterfront. This district historically is home to the most Italian Americans in the city, who have wavering opinions on the renaming of the holiday. Edwards is also running for senate in 2022, while Mayor Janey is out of the running for Boston’s next mayor.

Supporters and critics of Edwards took to the comments section to shed their opinions on the topic.

“Councilor Edwards, as an Italian-American, with all due respect: you’re dead wrong. Don’t honor my heritage by celebrating one of history’s greatest murderers,” said Facebook user Evan Turissini of Jamaica Plain and supporter of Indigenous People’s Day.

“I don’t want to discount the difficult position that Councilor Edwards is in as a young, Black woman in Boston’s political landscape. Her district is particularly diverse with wildly differing needs and opinions, and it’s pretty clear to see how she was trying to straddle those positions in her statement,” said Turissini in an email.

While Mayor Janey said in her speech that she didn’t, “need to have a public hearing to sign an executive order.” She also said she had conversations with the Italian American community in the North End, as well as Indigenous Peoples organizations throughout the Northeast, before coming to this decision.

“We have been working for several years to get Boston to properly acknowledge and be in relationship with Indigenous nations and people here,” said Mahtowin Munro (Lakota) , co-leader of the United American Indians of New England and the statewide Indigenous People’s Day campaign.

Munro said, “We wish to thank Mayor Janey and her staff for listening to the concerns of Indigenous people in the city and for her expressed commitment to Indigenous sovereignty and racial justice for Indigenous peoples in the Boston area.”

In a letter to Mayor Janey, Brian J. Patacchiola, a member of the Italian American Alliance said, “I cannot express enough to you my sincere disappointment with your failure to recognize Columbus Day and to put insult to injury, to recognize a different ethnic group’s holiday, in place of this existing one.”

In her speech Mayor Janey addressed the ability of the community to be able to support both groups, “Justice is not a zero sum game, we can lift up the experiences of Indigenous peoples and we can also respect Italian Americans.”

This executive order follows years of controversy surrounding the renaming of the holiday, as well as a string of vandalism and removals of Christopher Columbus statues across the country. This includes the beheading and removal of a Columbus statue in the North End in 2020.

Councilor Edwards did issue an apology after the mixed-reactions to her statement.

“For too many people, my comments yesterday were painful and confusing, and I’ve disappointed you. For that, I’m sorry.”

Edwards said that we do need an Indigenous People’s Day “to empower people and celebrate Indigenous leaders and heroes.” She also acknowledged the need to remove Columbus from his association with Italian heritage.

“Unilateral decision making is wrong. The people of Boston deserve meaningful engagement because we represent them,” said Edwards, reiterating her main issue with Mayor Janey’s decision.

“I think that, if she has been listening and reading the comments as she said, a great opportunity lies ahead for the Councilor. A lot of great conversation was generated in that thread  on what a new holiday honoring Italian Americans might look like and what it would entail,” said Turissini.

Indigenous People’s and their supporters hope to now move forward and shift the narrative away from the controversy to one of celebration and education.

Levell said, “Italians for IPD hopes that we center this conversation on Indigenous peoples, what they need and deserve, and what we all gain by celebrating them in place of Columbus. This really should not be about Italian Americans.”