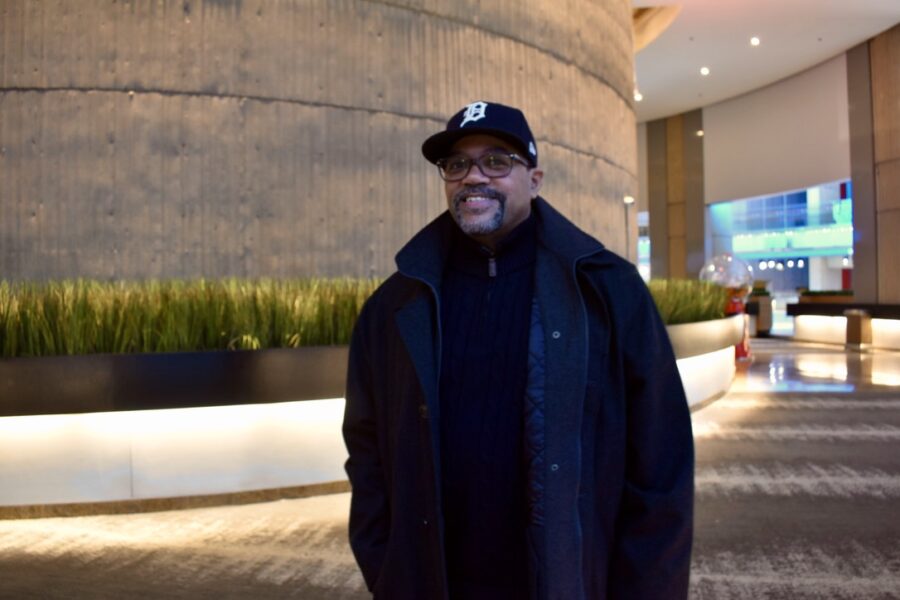 Though he is an expert sewer, leather craftsman, avid self-help book nerd, certified machinst and drug counselor, Derrick Hampton says he is often viewed by society for the 28 years he served in prison for second degree murder.

On a rainy afternoon in Detroit, Hampton wore a Detroit Tigers’ baseball cap and grinned from ear to ear in the lobby of the downtown Marriott; he was eager to tell his story.

Hampton was incarcerated when he was twenty-one years old, and it was not until he heard the words “guilty” and “life” that reality sunk in.

Once he arrived in prison Hampton began studying law textbooks and worked to understand why he received a life sentence. He said that he discovered that the justice system had failed him, and that the judge never gave a compelling reason for going outside the sentencing guidelines. In Michigan, second degree murder can result with a life prison sentence, or any number of the years determined by the court.

Hampton poured his energy into learning, reading, and getting his GED, though he continued to be denied his appeals. He said he even threw away his television set. “The guys thought I was crazy,” he said, but he didn’t have any interest in watching soap operas.

Hampton worked in the prison furniture factory and then the garment factory. “That’s when I really learned how to put anything together: pants, coats, jackets, shirts,” he said. He would teach fellow prisoners, referring to each other as “colleagues”, everything they needed to know about textiles and garments. “I was getting a life skill, working everyday coming in there,” he said.

Hampton said he made $1.07 an hour working in the garment factory and that the hourly wage to prisoners has not matched increased inflation over time. He said prisons use “outdated policies and procedures.”

According to a Prison Policy Institute report in 2017, prisoners make less on average than they did in 2001. The average maximum daily wage is $3.45.

Hampton described how he once could fill a whole bag with goods from the prison store for 30 dollars. “Now you can put $30 under your arm,” he said.

Hampton said it would cost his parents approximately three dollars to call him in prison. It would cost him a little over $2 to call them. When he entered prison in 1992, he said he could talk on the phone to his family for an unlimited amount of time. As time went on, phone calls were limited to fifteen minutes. If they wanted to extend the call, Hampton or his family would have to pay again.

According to data from the Prison Policy Initiative, the prison phone industry generates over $1-billion each year. This includes hefty fees incurred by family members, causing many families to go into debt according to a 2015 study by the Ella Baker Center.

Hampton said he had ideas for how to use this generated income to lower the recidivism rate, or likelihood of an individual to reoffend. He said that in prison there are certificate programs, but there should be a focus on individuals learning more vocational skills so they can find gainful employment upon release.

Hampton said the money generated from the programs could fund more skilled job training.“When you get home, you could be a real electrician, be a real plumber, [you could] be a real contractor,” said Hampton.

Employment is a huge barrier when individuals experience re-entry. One study from 2017 showed that steady employment reduces recidivism rates, and specific types of employment that are more high-level and skill-based can reduce the rate of re-offenders even more.

In 2016, Hampton says his odds of parole became real when he witnessed an officer having an aneurysm. He immediately leapt into action, trying to get help for the officer as quickly as possible. “Apparently that’s not normal in prison that prisoners help officers,” said Hampton.

When it came time for his annual parole review, he was told he’d been chosen to interview and said he thought it was a mistake. He said there was another Hampton, and thought it was probably for him. The interview was for Derrick Hampton.

The parole board officer asked him why he helped save that officer. Hampton told him he “ stopped thinking like a criminal.” The officer said he would help Hampton get out.

The parole officer also gave him a new job working on the suicide watch team. “They gave me the training and everything to watch these guys and talk to these guys and find out what’s going on with them,” Hampton said. Hampton said he was prepared for this role after reading books about the human mind and psychology.

After reviewing his file and going through the process, it came time for the parole board to vote. Because he was serving a life sentence, Hampton would need a majority vote to be granted parole.  Every member of the board voted in his favor, and Hampton was released in 2019

Hampton said not everything has been easy since coming home. He said he has been denied jobs after background checks despite being a great candidate. Hampton’s violent offense continued to create a stigma around his character even though his felony offense was nearly three decades ago.

“What I’m saying is ‘what is the reason for prison reform, if you’re never going to look at me in that fashion?’” said Hampton. He’s continued to remain resilient and has found employment working various textile jobs, including making seat covers for cars. He’s also worked with his daughter as a cleaner at a ski lodge.

During the pandemic, Hampton said he was laid off. He began making masks from dusk until dawn. He said he made more money working for himself.

Hampton makes handcrafted leather goods including belts, purses, Bible covers, and keychains. He said his parole agency bought his current sewing machine. Hampton has been selling his work even before he was released from his life sentence. His father used to help him sell his goods outside prison.

He has plans to create an online service for his designs early next year. It will feature a few key items, but Hampton’s favorite is doing custom work. He said, “I like to take your thought and put it into design.”

But that is only the beginning of his vision for his leather business.

Hampton said he hopes to learn the business acumen to create an inspirational keychain line and distribute at major retailers. He knows it will take time, “manpower and machinery.”

Hampton’s larger vision is to create his own garment factory that employs women and men who were previously incarcerated, domestic abuse victims, or have disabilities.

Hampton is one of many in this situation, and said he understands he’s lucky to have had support through this process. His advice to other individuals currently incarcerated, or about to be released is to “Never give up on yourself or your ability to keep showing people that you’ve changed.”